Primary goals: Kurdish autonomy within Turkey (in the past they sought to establish an independent state in the southeast of the country.

Area of activity: primarily in Iraq, Syria and Turkey.

Primary funding sources: trade in drugs, tobacco and humans. Collection of taxes and protection. Donations and aid money from the Kurdish diaspora in Europe. 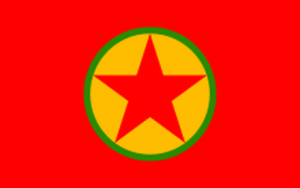 Even though its definition as a terror organization is sometimes questioned, the Workers’ Party of Kurdistan (or its more popular abbreviation: PKK for Partiya Karkerên Kurdistanê), is categorized as a terror organization by many countries and international organizations, including the USA, Canada, Australia, Japan, the European Union, NATO – and Turkey of course. The Marxist-Leninist organization, mainly comprised of Turkish-Kurds, was established in the late 70s with the aim of striving for an independent Kurdish state in south-eastern Turkey.

They began taking militant action towards realizing their vision against the Turkish regime in the mid-1980s. Since then both sides have experienced cycles of harsh violence, costing the lives of over 40,000 people. One of the climactic moments in the bloody conflict was recorded in the mid-90s, following the terror attacks in which PKK control spread from more rural areas to Turkish city centers. The regime responded sharply. Following governmental orders, the Turkish military began to bomb Kurdish villages – thousands of villages were destroyed and hundreds of thousands of Kurds were forced to flee their homes.

But it was after the capture of PKK leader and founder, Abdullah Ocalan, in a Turkish intelligence operation in Kenya in 1999 (which according to its members included the involvement of Israeli intelligence agency, the Mossad), that the Kurdish organization began to soften and moderate its demands. From prison, Ocalan declared peace with the Turkish and called upon the organization’s members to set down their weapons and their militant line and engage in open dialogue. The aspiration of an independent Kurdish state was diminished to creating Kurdish autonomy within Turkey that would allow equal rights for the country’s Kurdish minority. The ceasefire lasted 5 years before the two sides backslid into violent struggle that lasted until 2012.

In July of 2015 the situation deteriorated into further violence which has lasted until today. The most recent escalation came in light of the increasing fight against ISIS in Syria and the building political tension, accompanied by Erdogan’s harsh responses to the pro-Kurdish HDP party, against the background of Turkish parliamentary elections. In that same period, the PKK took an active part in fighting against ISIS in Iraq and Syria alongside an additional Kurdish militia, and was instrumental in liberating ISIS’ siege on the Kurdish town of Kobani in northern Syria.

As part of the fight, the Kurdish side argued that the Turkish were physically obstructing the transfer of aid to the besieged city and even accused Turkey (of Sunni majority) of supporting the Sunni terror organization. Soon the situation deteriorated into a militant clash, including terror attacks against Turkish security forces on the one side, and on the other side extensive military attacks by the Turkish army against Kurdish strongholds. The current conflict has claimed the lives of thousands of people on both sides.

According to the US State Department’s annual terrorism report, the PKK has many and varied sources of capital and relies heavily on the widespread Kurdish diaspora across Europe for funding its operations. According to estimates, the money flowing into the organization ranges from between $50 to $100 million annually.

The primary source of PKK’s income stems, unsurprisingly and similarly to other terror groups, from the drug trade – namely heroin and cannabis. The United Nations Office on Drugs and Crime (UNODC), estimated that the organization makes about $75 million annually from heroin. According to the report’s writers, profits from the drug trade come primarily from taxing merchants that pass through the main route from Afghanistan and Iran to Europe, or distributors of the drug in various European countries. Other assessments argue that PKK members have gotten deeper involved in the drug industry and that they produce considerable additional revenue from independent heroin production. In the past, British intelligence estimated that the PKK is responsible for 40% of the heroin smuggled into the European Union, with the US Treasury also noting their significance in the global drug industry.

Another important dimension of the PKK’s illegal business transactions is human trafficking, as well as pirating of tobacco and cigarettes, according to a special report by a NATO intelligence branch. As in the drug trade, the geographic location of the Kurdish diaspora plays a significant role and grants an important advantage and a source of profit. From the illegal migration from Asian and African countries and smuggling people and illegal substances into European countries, the organization is making millions of dollars each year.

Apart from its criminal activities in order to make money, the PKK also runs a legitimate and legal network for raising funds and aid money from its many supporters. The PKK’s European arm runs hundreds of aid organizations for increasing propaganda and collecting donations and solidarity tax from among the Kurdish community, particularly in Germany. A special report published by Germany’s domestic intelligence service (the BfV), estimated that the sum of funds flowing into the organization from donations comes to about 30 million dollars annually, about half of which is collected from the Kurdish community in Germany.